[update] We received a lot of comments requesting for the source code. At the moment we are very busy, so unfortunately we haven’t had the time to clean-up the marker detection code. Because this has already been the case for quite some time now, we have uploaded the code (under the GPL). You are free to download the code in the zip file at the end of this blog post.

The code is just a prototype: it is hardly optimized and needs a lot of clean-up (and better memory management ;-)). That said: it’s yours to play around with. Good luck with it and enjoy![/update]

We (Corné and Reinder) started with looking for existing AR frameworks and found one interesting open-source project: ARToolkit (plus). This toolkit is written in C/C++ but also ported to flash en used in many AR demos you can find on the internet.

Unfortunately, the algorithm used for the detection of markers in this toolkit has some downsides:

There are some successors of ARToolkit, using edge based detection algorithms (like ARTag and Studierstube Tracker) but these are closed-source libraries.

In 2008, Martin Hirzer wrote ‘Marker Detection for Augmented Reality Applications’ [1], an article explaining an edge based marker-detection algorithm. We decided to implement this algorithm in C++.

At the moment our code is just a prototype. Eventually (after a cleanup) we will open source our implementation and/or donate it to the ARToolkit code base.

In this blog post we explain the implemented algorithm.

[update] At the end of this post you can find a video of the marker detection in action. 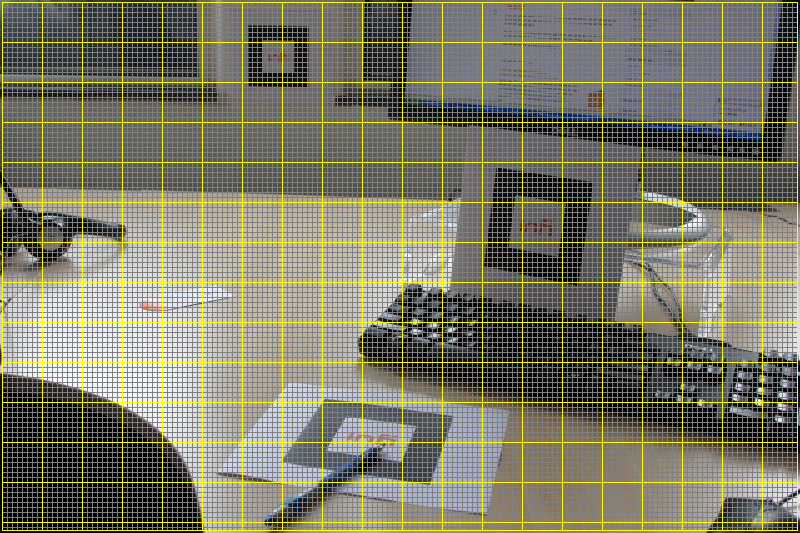 First the image is divided in small regions of 40×40 pixels and each region is divided into horizontal and vertical scan lines 5 pixels apart.

The next 3 steps are executed apart inside these regions which boosts the performance dramatically.

Then a derivative of Gaussian is convolved on each scan line to estimate the component of the intensity gradient along the scanline. 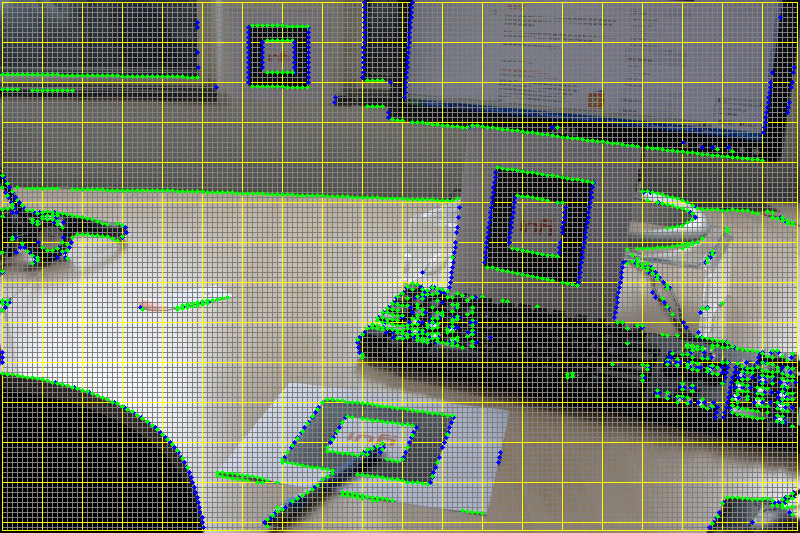 This Gaussian derivative is used to detect black/white edges in the image. The Gaussian derivative is based on convolving the image with a small, separable, and integer valued filter in horizontal and vertical direction and is therefore relatively inexpensive in terms of computations. Local maxima along the scanlines stronger than a certain threshold (for all three color channels!) are considered to be edgels.

The Gaussian derivative kernel used, is given by:

After the detection of the edgels, a RANSAC-grouper algorithm is used to construct line segments in each region [2]. 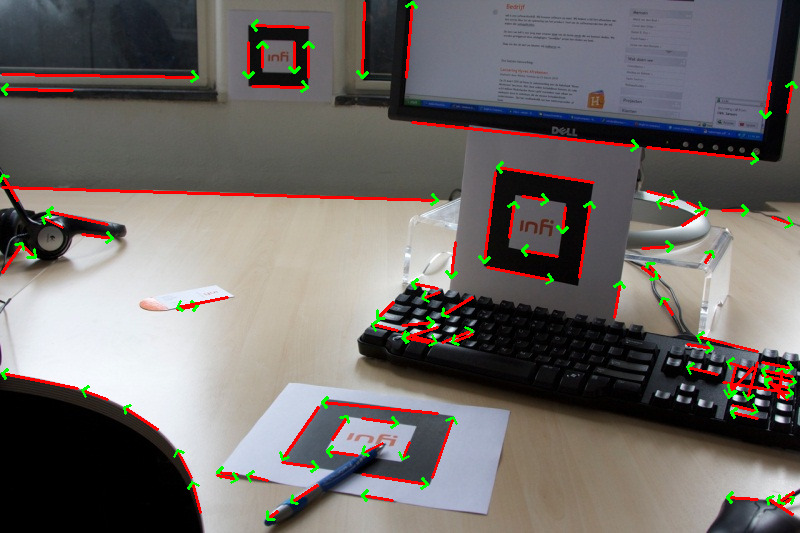 RANSAC is an abbreviation for “RANdom SAmple Consensus”. It’s an algorithm to find groups of “inliers”, i.e. points which can be fitted into a line.

The RANSAC algorithm in short:

Because we know the orientation of the edgels from step 2, we can give the linesegments an orientation. In the image above, the constructed segments are displayed as red and green arrows.

In this step the segments are merged to lines.

Two segments are merged if:

The merged lines are displayed as red/green arrows in the image above.

In this step the lines are extended along the edges. 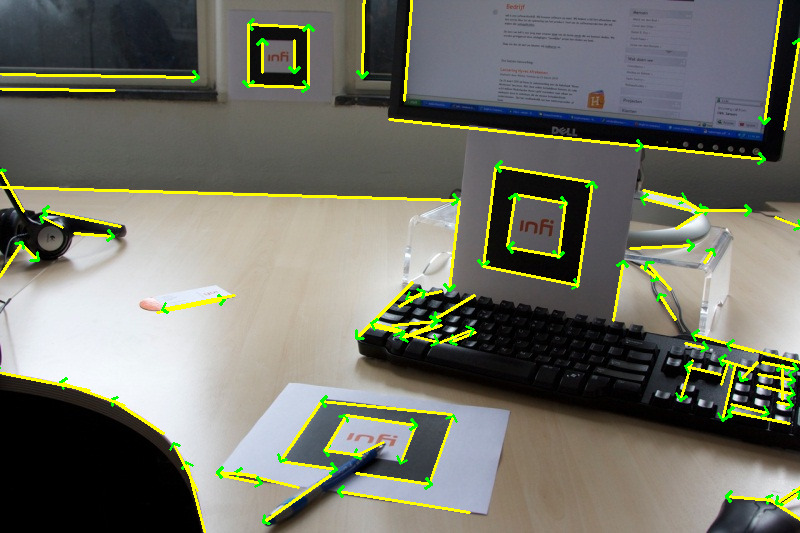 Because we scan only pixels on scan lines 5 pixels apart, it’s inevitably that the merged lines don’t fit on the entire length of the edge of a marker. So in this step we extend the detected lines pixel by pixel until we detect a corner:

The extended lines are displayed as yellow arrows in the image above. In step 6 and 7 only lines with at least one corner are used.

Keep the lines with corners. 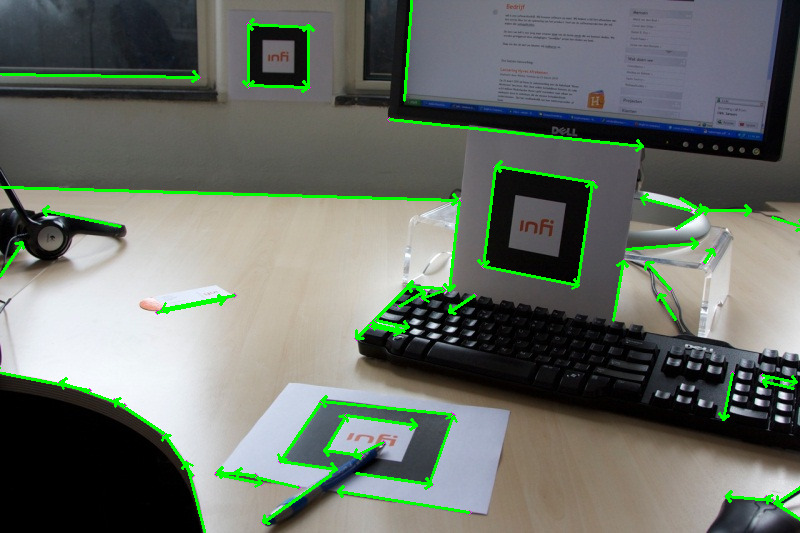 Finally, we try to find all markers in the image. 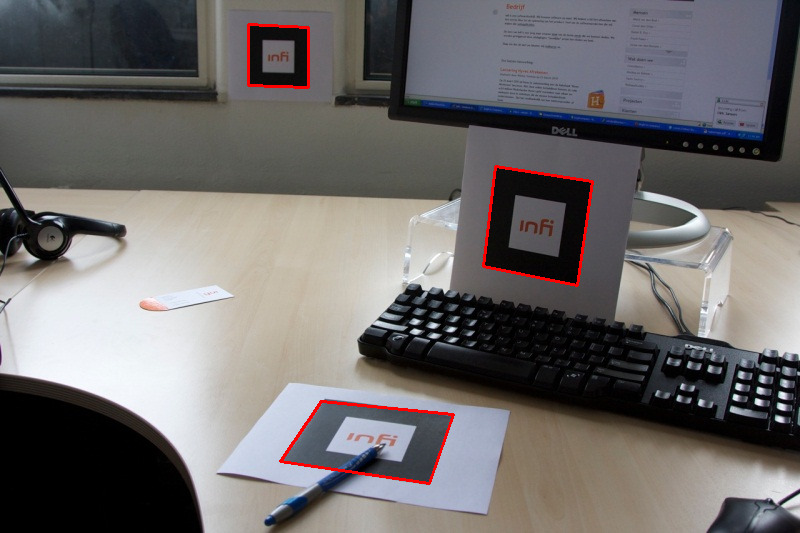 To detect the markers in the image, we try to find chains of 3 to 4 lines. A chain is a list of lines where the end of one of the lines hits the start of another.

After finding such chains, we only want to keep chains which form a rectangle counter clock wise. These chains will have black ‘inside’ and are probably markers. Knowing the orientation of the lines, a cross product for each two successive line segments in a chain is used to check this condition.

After finding all markers, for each marker the 4 intersections of the lines in the chain are considered to be the corners. Calculating the positions of corners by these line-intersections gives a robust algorithm. Even if only 3 lines are detected and/or a corner is occluded, the marker will be correctly detected most of the time.

In the image above, all detected markers are displayed as red rectangles. Notice the correctly detected marker at the bottom of the image, although one edge is partially occluded by a pencil.

Now we have the coordinates of the detected markers. The next step would be to identify markers and distinguish them from each other in order to use this algorithm in an augmented reality application, but that will be a next blog 🙂